Meet the experienced and friendly doctors and staff who make D. Douglas Friend, O.D. the leading provider of vision care products and services in Troy. 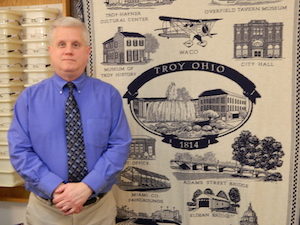 Dr. D. Douglas Friend graduated from Troy High School in 1975. He began working on his microbiology undergraduate degree at The Ohio State University in 1975, and was accepted into the Optometry program in 1978. He ultimately received a Doctor of Optometry degree, graduating cum laude as a Beta Sigma Kappa Honor Student from The Ohio State University College of Optometry in 1982. After working with both Dr. Donald Bergmann and Dr. Robert Osher in Cincinnati, he moved back to Troy in 1984, taking over the practice of Dr. Stanley Vorpe. Dr. Friend has been active in the Troy community having been a member of both the Troy Area Chamber of Commerce and the Troy Kiwanis Club. He is currently a member of the Troy Dollars for Scholars Board of Directors, of which he served as President for several years starting in 1995. Dr. Friend is also a current member of the American Radio Relay League. Dr. Friend currently resides in Troy with his wife Rebecca and has two sons, Derrick and Korry. Some of his hobbies include amateur radio, sports, and woodworking.

You can schedule your next appointment with us online!